Yesterday we left Chub Cay just before daybreak – following not too far behind John and Jane on Explorer ll – as well as a couple of other boats who headed off in the opposite direction. I have to admit it was kind of cool to be heading off with our navigation lights blazing the way but having said that I don’t think I’d want to be doing an overnighter (so don’t get any ideas Skipper!)

Our short 13 nautical mile deep water stretch from Chub Cay to the Bahama Banks was a real doddle compared to our trip on the same stretch in December. The journey across the banks wasn’t too bad either - Lance did most of the driving from inside and he found that much easier. We only went up to the flybridge when VPR (visual piloting rules) were required to wend our way through some coral heads. It was a long way from Chub Cay to Bimini and we did consider anchoring at Cat Cay again, but with daylight saving now it is still light at 7.30pm so we soldiered on and arrived here at around 6pm.

Of course this was our first stop after Miami in December so we knew exactly where we were going and which marina we wanted to tie up in. John and Jane arrived shortly after us but they’ve already left for Lake Worth tonight. They are in a very large 58ft sailboat – so the conditions out there would not be too bad for them I guess.

We’re focusing more on leaving towards the end of the week when the winds have dropped and the seas have flattened! We’ll be up at 6.30am tomorrow listening to Chris Parker’s weather on the SSB.

We had not even finished docking when a local fisherman apparoached from the water selling lobster tails – that’s all they seem to bother with here. (I’m not sure what they do with the rest of them.) So we bought a bag of 12 for $30 and then later another guy came round the docks offering us more – after some negotiating Lance also got him down to the same deal. He didn’t have them with him though so he said he’d be back. We’d pretty much given up on him returning but eventually there was a knock at the door with a bag of – this time frozen – tails. So our freezer is pretty full and we still have some mahi mahi to eat.

So here we are at Bimini Blue Waters Resort – it was really empty when we arrived but this morning two large catamarans arrived and they were loaded with teenagers. Lance counted 17 on one of them and probably as many on the other! Apparently this is “mid term break” and the kids love to come over from Florida to Bimini to party. (The guide book does mention this occurance in mid March – but heh there’s not much choice about where we cruisers can stage [wait for a weather window] before heading back to the US.)

So it’s party time! Just like Australia in November when the school leavers flood into Surfers Paradise on the Gold Coast for a week of boozing and partying. A week to be avoided at all costs.

Fortunately the marina we’re in has two docks and the party boats are next to each other on the other one. There was some music earlier in the day and then it went fairly quiet, they all had a bbq dinner and then headed off to the local haunts. It’s just gone 11.15pm and the first wave have arrived back  and the party has started in earnest. Loud music, lots of singing and I guess just generally having a fun time. (I keep reminding myself that we were young once too.)

And yes they’re here for the week – just like us.

One amusing episode that I didn’t witness but that had Lance in hysterics goes something like this – at the back of the catamaran facing our way, there is a dinghy suspended on davits and swinging freely on two ropes. Well Lance watched one of the young girls climb onto the dinghy, I imagine with the intention of sitting in it, but as she stood on the one side of it it of course tipped up and deposited her into the water between the dinghy and the boat! Rather embarrassing I’m sure!

As I’m writing this a squall has just come over and I’ve had to run and shut all the hatches – I guess this might put a damper on the party. 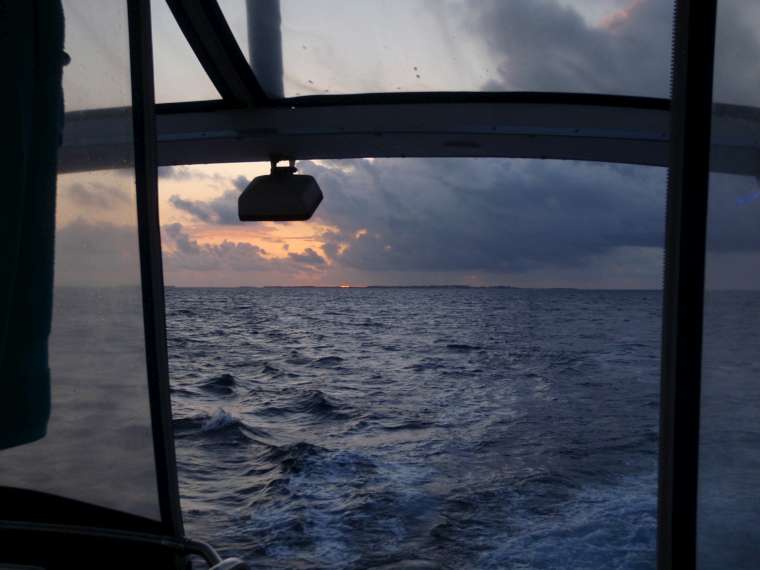 Caption
Daybreak with Chub Cay in the distance 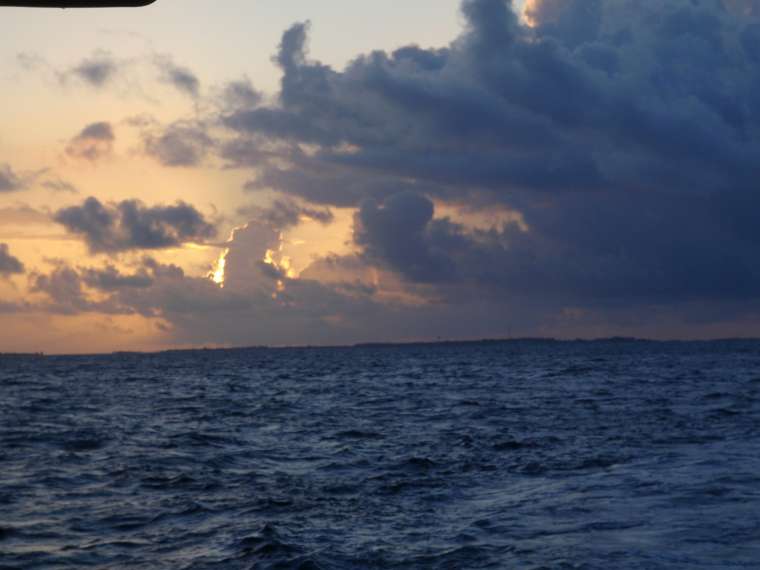 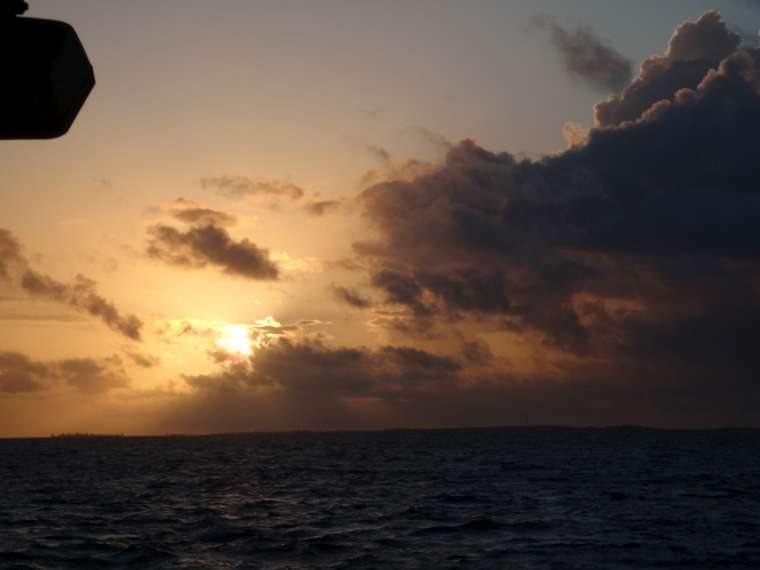 Caption
The sun peeps out from behind the clouds 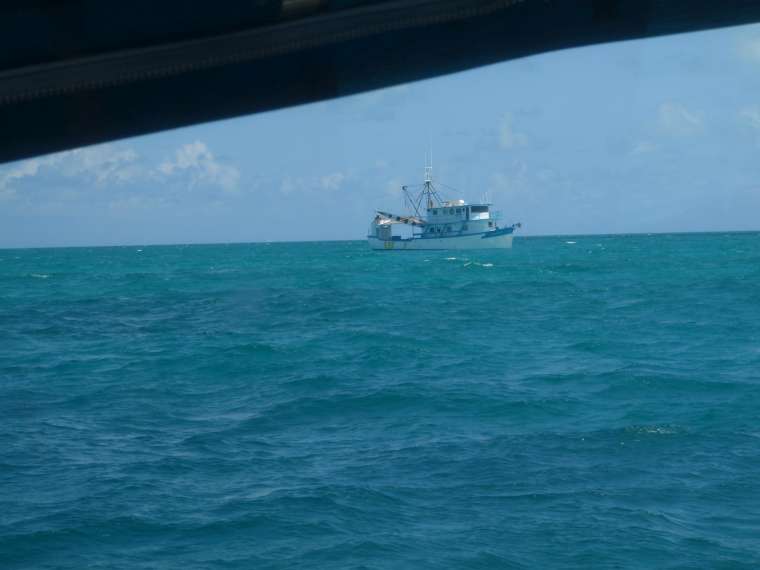 Caption
Local fishing boat out on the banks 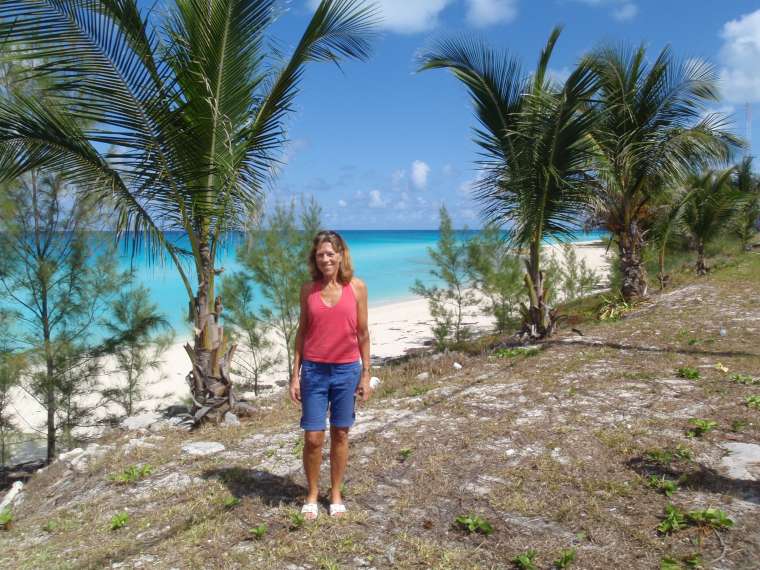 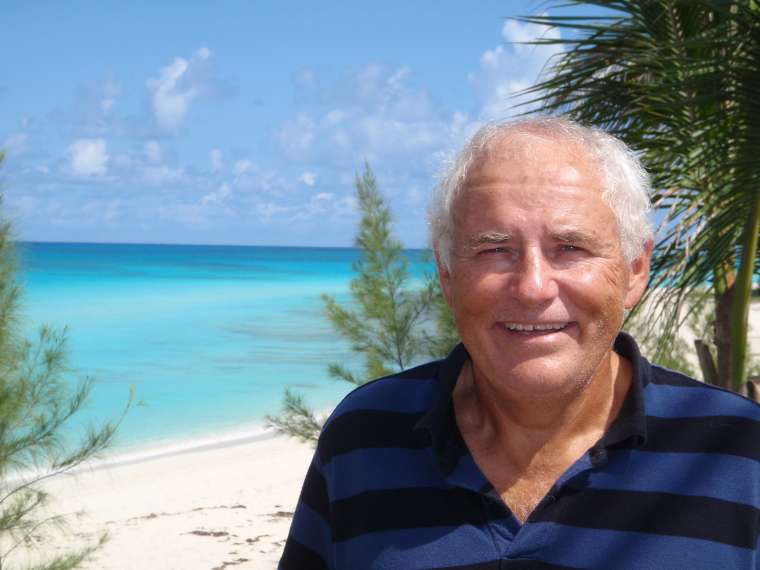 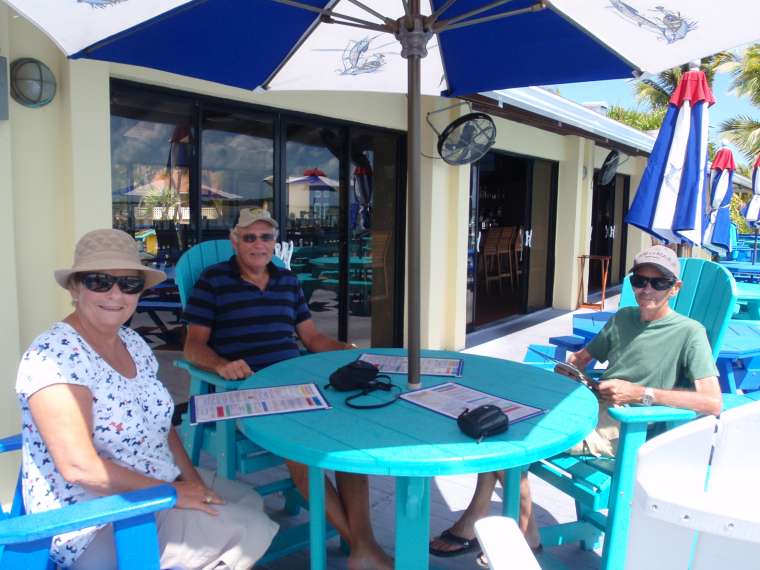 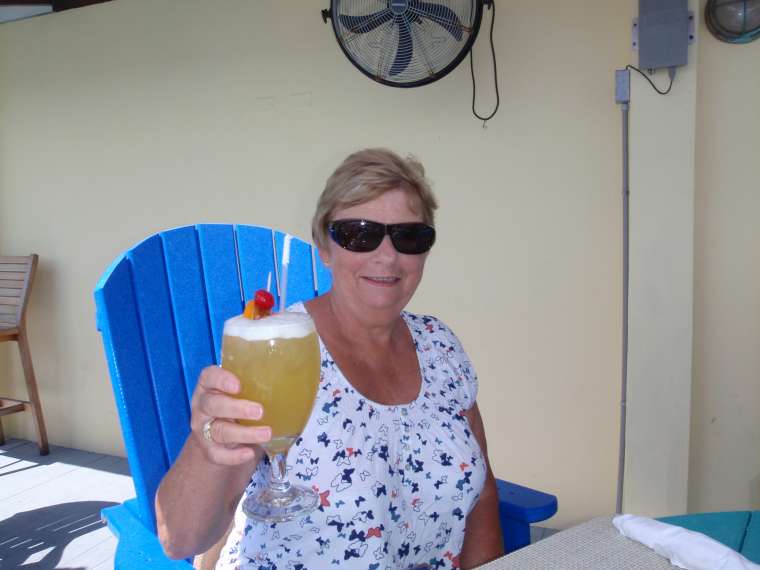 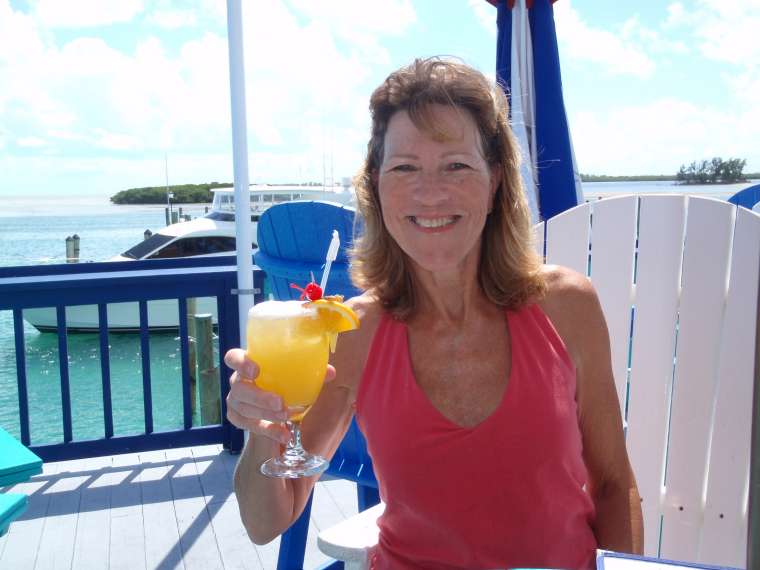 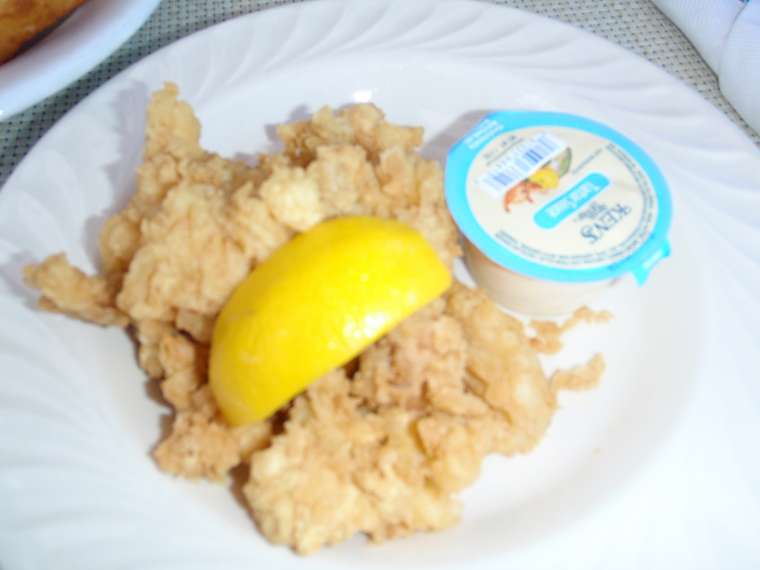 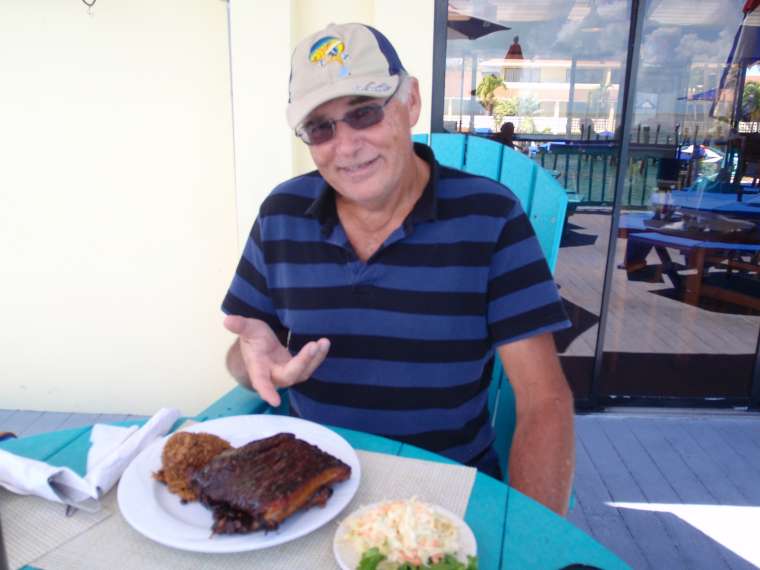 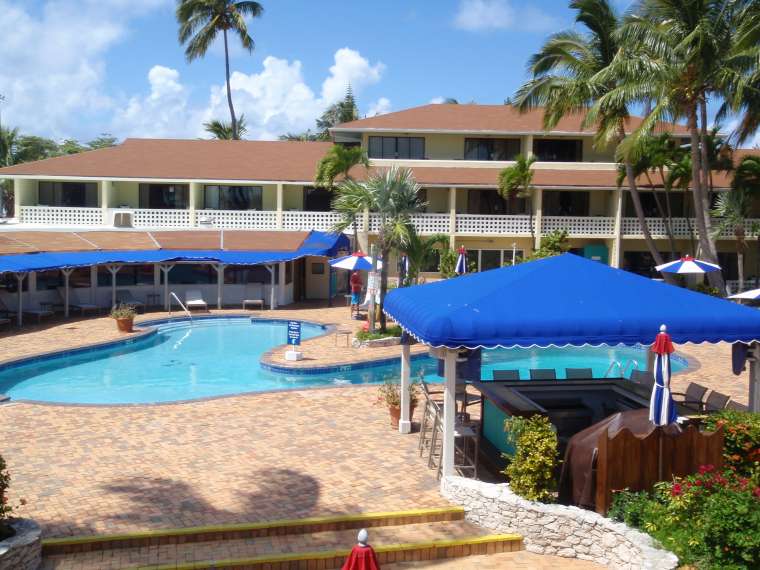 We had a quiet day in and around the marina today – all the shops except one were shut being Sunday and we had a lovely lunch at the Bimini Bay Game Club next door. Tomorrow might be a day for the beach – I have to reinforce my tan before heading home!